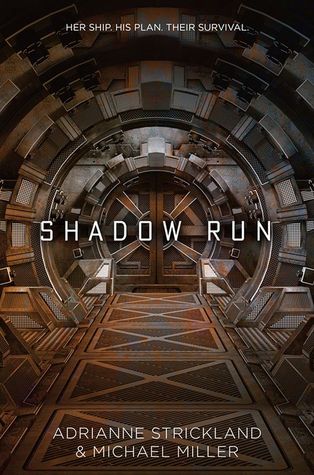 RELEASE DATE:  March 21, 2017
AUTHORS: AdriAnne Strickland & Michael Miller
GENRE: Young-Adult, Sci-fi, Fantasy, Adventure.
PUBLISHER: Delacorte Press
SUMMARY: Nev has just joined the crew of the starship Kaitan Heritage as the cargo loader. His captain, Qole, is the youngest-ever person to command her own ship, but she brooks no argument from her crew of orphans, fugitives, and con men. Nev can’t resist her, even if her ship is an antique.

As for Nev, he’s a prince, in hiding on the ship. He believes Qole holds the key to changing galactic civilization, and when her cooperation proves difficult to obtain, Nev resolves to get her to his home planet by any means necessary.

But before they know it, a rival royal family is after Qole too, and they’re more interested in stealing her abilities than in keeping her alive.

Nev’s mission to manipulate Qole becomes one to save her, and to survive, she’ll have to trust her would-be kidnapper. He may be royalty, but Qole is discovering a deep reservoir of power–and stars have mercy on whoever tries to hurt her ship or her crew.

Shadow run is a pretty interesting sci-fi read but to be honest it didn’t reached my very high expectations. I haven’t watched firefly but I was very much intrigued when I first read the premise of it and that’s why I had put some high expectations on it. Firstly the concept of this book is very hard to grasp and I also struggled a little bit with the writing style especially Nev’s parts. Nevertheless, I enjoyed reading this book because of it’s unique concept,  interesting characters and the amazing action scenes. When I first saw the cover of this book, it actually reminded me of a door to X-Men’s Cerebro.

The story follows Qole Uvgamut who is actually captain of the starship Kaitan Heritage. She’s the descendant of the legendary shadow fishers who hunts shadows, an unstable dangerous energy source in space that yields sickness and death. The children of the fisher families always die young because of their too much exposure to the shadows. Nev, a prince in disguise who is on a mission joins their crew in order to meet the legendary captain. He never thought that the captain would be so young and before his disguise is found out, Nev needs to befriend her and convince her to get to his home planet but it is harder than he thought it would be because every time he tries to talk to her, it always ends up getting her angered or upset. Before he can succeed on his mission, his secret finally gets revealed when another royal family who is also Nev’s family rivals tracks them down who are after Qole’s mysterious abilities. For the sake of both of their planets civilization Qole and Nev makes a deal which eventually turns into a disaster.

Qole is a strong female protagonist in this book but as the story progresses we get to see her vulnerable and emotional side of her. She’s very protective of her crew who are more like a family to her. I really liked her character and I’m glad to know that she isn’t a total perfection. Nev is a pretty likable character. He’s definitely a swoon worthy prince who is strong, brave, handsome, righteous and very loyal. Nev and Qole posess quite opposite personalities but we already know opposites always attracts. The romance is a slow build and their relationship develops very slowly with each time they get to know about each other. The secondary characters Basra, Arjan, Eton and Telu are the greatest addition to the plot. Arjan is the older brother of Qole and also the only living family of her. Basra is an enigma and also a gender fluid character. His mysterious identity intrigued me from the very start and when It was finally revealed I wasn’t surprised at all because I already predicted it. Eton is the strongest and oldest guy in the crew who harbors many secrets that we don’t know yet but I really want to know more about him. He’s kinda like a bodyguard to Qole and he hates royals. Telu is the youngest of the crew and also a talented hacker who can easily manipulate any tech. I liked her sarcastic and fun personality.

The plot is interestingly unique but some parts are predictable. At first, I had trouble following the whole concept which seemed confusing yet very interesting. But as the story progressed it started to become more clear and then I was hooked. The story dragged a little bit in the middle but mostly it is a fast paced read and I loved the action which definitely makes it a worthy read. Though the twists in the plot is predictable, it never lessened my interest. The story is told in both Nev and Qole’s POV. The writing style is okay-ish but I had struggled with the nev’s parts eventually, I got used to it. I liked the world both authors has created but I wish there was more of it. I enjoyed Qole’s cold planet Alaxak more than Nev’s home planet and their politics. I can’t wait to explore what these authors has in store for us  next.

Overall, I loved it! It’s a great YA sci-fi read filled with action, thrill, romance, political intrigue and adventure. I was really going to DNF this book but now I’m glad that I didn’t. I immensely enjoyed the concept, the characters and the riveting action. I’ll definitely look forward to the Kaitan Heritage’s next inter-galactic adventures.

I highly recommend this to everyone who likes action packed YA sci-fi reads.