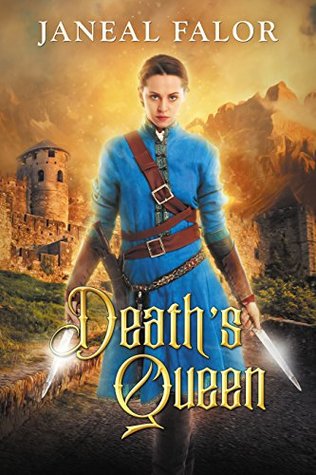 RELEASE DATE:  March 6, 2017
AUTHOR: Janeal Falor
GENRE: Young-Adult, Fantasy.
PUBLISHER: Chardonian Press
SUMMARY: An assassin without a name, born to kill. Owned by a vicious man who refuses to call her anything but girl, she is forced to commit atrocious acts of violence. Vowing to take her future into her own hands, the seventeen-year-old decides to risk everything on one act of defiance—drinking from The Death Drink. The beverage kills most whose lips touch it—only allowing those who are destined to be royalty survive the first sip.

To the astonishment of the nation of Valcora, she imbibes it and lives, which crowns her queen. Thrown into a life of royal intrigue, she now has a purpose—to rule with the fairness she was never shown. Despite her altruistic plans, it becomes apparent that someone wants her dead.

The new queen must use her training from the former life she only wants to forget in order to stay alive long enough to turn her kingdom into something she can be proud of. She’ll hold onto the crown… or die trying.

I love reading books with female assassin as main character so when I saw this book and it’s interesting synopsis, I decided to give this a shot. I had no high expectations before going into this book but I was hoping for a quick entertaining read. I enjoyed reading this book but I also had few issues with it. I really liked the female protagonist of this book who is totally kickass. The plot is decent but nothing mind blowing. I loved the interesting concept of this book which is the first thing that grabbed my attention.

The story starts with our nameless heroine/assassin who finally decides to stop being an assassin for her cruel master who raised her since she was young. She hated killing and she knew that her master wouldn’t give up his greatest weapon easily so with no choice left she escapes from her master . While on the run, the guilt of all the killings is eating away inside her and she thinks that she doesn’t deserve to live so she decides to end her life by drinking the Death Drink. The chalice is sort of an enchanted cup which determines the next queen and only women who is worthy of becoming the next queen is survived after drinking from it. When she drinks from the chalice and waits for her imminent death, shockingly nothing happens to her and the next second she becomes the new queen of Velcora. She really can’t believe that she’s become a queen and will live in the palace with everyone obeying her commands. During her time at the palace,  assassins were sent to kill her by an unknown enemy but thanks to her old skills she survives. With the help of a guard named Nash whom she later makes him her royal advisor, she tries to become a good queen for her people in the kingdom.

I really liked the female protagonist of this book! She is totally badass character who has deadly fighting skills. She maybe strong on the outside  but inside she’s still vulnerable seventeen year old girl. Though I really liked her, I can’t emotionally connect with her. It would be great if we had a few glimpses of the killings or the nightmares that are haunting her every night because her wanting to kill herself is pretty much annoyed me sometimes and I really want to know what she has gone through so that I could understand her better. Nash is pretty nice guy and a total gentleman who is loyal to his country and the queen. He didn’t made much impact in the story but I liked his character in the book. There is not much romance in this book but there is a growing attraction between Nash and the heroine and I enjoyed their every interaction. The secondary characters are okay-ish but they aren’t memorable enough to describe.

The plot is pretty good but unfortunately, it was quite predictable for me. However, I found myself enjoying the story only because I liked the main character and her badass attitude. The inner monologue’s seemed a bit lengthy but I wasn’t much bothered with it. The story is a fast paced read told from the mc’s POV. The writing is good and I loved the simple world building but I was a little bit disappointed that there isn’t much magical elements in it.

Overall, it was good but not great! The book finally concluded by leaving some things unresolved so I really hope there’s going to be a sequel to it.

Despite the issues, I enjoyed reading this book so I definitely recommend everyone to give this a shot.