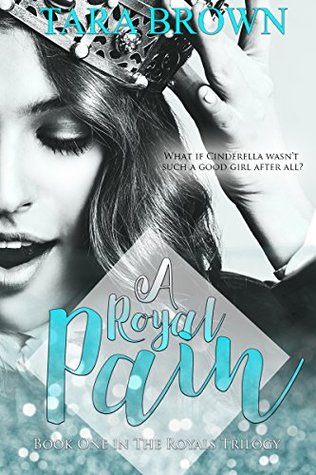 RELEASE DATE:  November 1, 2016
AUTHOR: Tara Brown
GENRE:  Young-Adult, Contemporary, Romance.
SUMMARY: When a severely drunk, and slightly drugged, Finley Roze slipped into a hospital bed, she never imagined it would start her on a path to meeting the man of her dreams.
Mostly because she didn’t believe in the man of her dreams. What seventeen-year-old even thinks of that?
But when Aiden Sorenson turns out to be Mr. Right, everything else ends up being wrong, including Finley’s family history.
Finley is exactly what she appears to be: callous, selfish, shallow, and completely friggen’ unlucky.
But everything changes when she meets him.
Even if Aiden isn’t what he seems.
When Finley discovers just WHAT he is, she is not as impressed as she should be.

The problem with meeting Prince Charming is letting yourself be open to the possibility of true love.

Don’t miss this true love story, AKA a fairytale romance.

The Royal Pain is kinda modern retelling of Cinderella story with a twist where our heroine is actually a bad girl instead of a sweet goody goody girl. I don’t read much of Cinderella retellings but something intrigued me about this book because I’ve never read a book about a bad Cinderella so I want to give this a shot. Well, this was an okay read but I didn’t liked the main protagonist. I can endure sarcastic, mean and tough girls but Finley seemed too annoying and bitchy for my taste. Nonetheless, it was a good read and I did enjoyed it but not as much as I thought I would.

Seventeen  Year Finley Roze is a spoiled brat who’s life revolves around parties, drinks, friends, and boys. Her life completely changes when she gets drunk and slightly drugged in a party which eventually lands her in a  hospital bed. Finley’s father gets furious with her and sends her to her Aunt Hattie’s place to spend her summer and gets restricted from all the technology to communicate with her friends. When her Aunt takes her to the Lakeside Retirement Community, she meets the handsome Aiden Sorenson who might be the man of her dreams. Aiden and Finley are complete opposites but with each time they spend together they get more closer. But Aiden’s isn’t who he seems to be and when she finally learns about his mighty secret, she gets pretty scared and feels she isn’t good enough for him.

I don’t like Finley Roze but I don’t hate her either. She is sarcastic and spoiled girl who acted downright bitchy and annoying at the beginning. I couldn’t connect with her and didn’t cared what happened with her. Even after the character development at the end, she still didn’t piqued my interest.  I liked Aiden Sorenson! He was adorably sweet, fun, gentle and quite romantic too. Finley and Aiden are perfect opposites to each other and of course, opposites always attract. I enjoyed the relationship between Finley and Aiden but I was disappointed with their chemistry which totally lacked all the fireworks and sparks. As for the supporting characters, I loved Jess, her step-sister who helped Finley so many times and also the hilarious old ladies from the retirement community . Coming to the hating list, I have her best friend Linna and also her evil step mother Sheila whom I immensely hated.

The plot was okay but I still think it could’ve been much better. Although, I enjoyed the overall story, It failed to excite me because of the predictable story and that shocking twist at the end which I obviously saw it coming and also not to forget the annoying heroine which was a bit turn off for me. The story moved in a slow pace and told in Finley’s POV. I liked the writing style of the author, It was simple and easy to understand.

Despite all my issues, I honestly think it was a good read but not great enough to fangirl over. I didn’t liked Finley so the next book may not work out for me but I would definitely check out more books from Tara Brown.

Though It wasn’t up to my expectations, I would definitely recommend it to the readers who like modern retellings cause I really think many readers would love it.