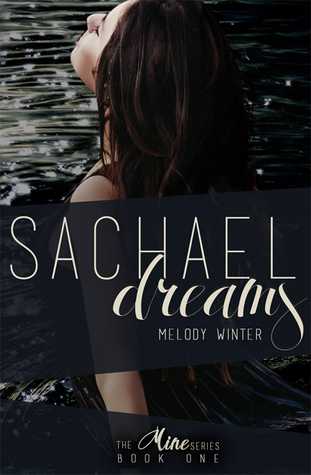 RELEASE DATE:  November 24, 2015
AUTHOR:  Melody Winter
GENRE:    New-Adult, Fantasy, Paranormal, Romance.
PUBLISHER: REUTS Publications
SUMMARY: Twenty-two-year-old Estelle Bailey has had enough of busy city-life and her hot-tempered ex. She escapes to the seclusion and peace of her family’s clifftop home in Ravenscar, where the soothing solitude whispers to her soul as strongly as the sea itself does. But her newfound contentment is interrupted when a mysterious man—a Sachael, master of seduction—joins her midnight swim unexpectedly.

Estelle struggles against his charm and the overpowering attraction she feels for him. He offers her a life she never could have imagined, a life beneath the waves . . . but at what cost? Before she can decide, she’s captured, ensnared by the Sect, a secret enemy of the Sachaels, becoming a pawn in a war she knew nothing about.

Now, she’s left with a new choice—escape the clutches of the Sect and flee into the ocean, or side with her alluring, intimidating captor and destroy the Sachaels forever. Can she turn her back on the man she might love, or will the secret of her heritage change everything?

Set against a picturesque backdrop, Sachael Dreams is the first in a new series, exploring themes of romance, love, and identity, and the struggle that happens when all three collide.

Basically, I’ll read anything that has merfolks or any sea creatures in it so when I found this book, I knew I had to read it. After I finished with this book, I felt this was an intriguing read but there are also some aspects in this book that made it a bit less enjoyable for me. Firstly, the slow pacing of the book has kinda annoyed me a little bit because I mostly prefer medium or fast paced books but the interesting plot has definitely made up for it and secondly, the insta-love that I wasn’t really fond of made me cringe sometimes. Though I loved Melody’s Winter’s Inquity, I can’t tell the same for Sachael’s Dreams but It doesn’t mean I hate it either. Apart from the insta-love craziness, it was a great read that’s why I gave it a 4 stars instead of 3 stars. The story really has a great potential and many readers would absolutely love it.

After her break up with her hot tempered ex, twenty two year old Estelle Bailey escapes to her seclusive clifftop home in Raven Scar to have some peace. Every month on a full moon night, Bailey does a midnight swim ritual in the sea  and one night during her midnight ritual, she meets a stranger- a sachael who calls himself Azariah. When Azariah talks to her in her dream, Estelle comes to know about Sachaels and also about the world under the sea. When the relationship between Azariah and Estelle grows stronger, they are encountered by a sect, enemies of Sachael who immensely hates their existence. When Estelle gets kidnapped by a sect, she learns the dark truths about the Sachael’s and also unveils a secret about her heritage that totally changes her life. Now Estelle is finally left with a choice and she has to decide whom to trust.

Estelle is a pretty likable character who is strong and independent but she isn’t a total perfection either. She’s a bit damaged due to her abusive relationship with her former boyfriend who is downright obsessive. Azariah may seem kinda backward with his gentleman personality which can be understandable due to his lack of interaction with humans but it does made him more appealing. I liked the romance portrayed between Estelle and Azariah but I really wish it wasn’t an insta-love because they are always a turn off for me. However when the sect came into the scene, the story took an interesting turn and I was totally hooked. As for the supporting characters, I liked Micheal and Orentes. Orentes is an Oceanid aka merman and also  a member of sect. He creeped me out at the beginning with his possesive nature but at the same time, he intrigued me. As for Micheal, he was kinda cute and friendly and I really want to know more about him.

The plot was interesting enough to keep my interest but some parts are quiet predictable if you’re into paranormal books. As I already said before, the story moved in a slow pace so if you’re looking for a fast paced action packed read then you’ll definitely get disappointed with this book. But if you’re looking for a book with adventure and romance with a paranormal twist then this book is just for you. The book is told from the first POV of Estelle and I loved the vivid writing style of the author. I think it’s a great aspect of this book and I pretty much enjoyed reading it. The world the author created under the sea is quiet beautiful and I would love to see more of this world and all the creatures living in it.

Overall, It was an entertaining read! Despite few issues, I’ve eventually come to like it and the cliffhanger at the end definitely piqued my interest and I’m interested to know what happens next.

I highly recommend this book to everyone who loves paranormal romance but I must warn you though the insta-attraction/love might seem unappealing to some readers but It’s definitely worth a read.