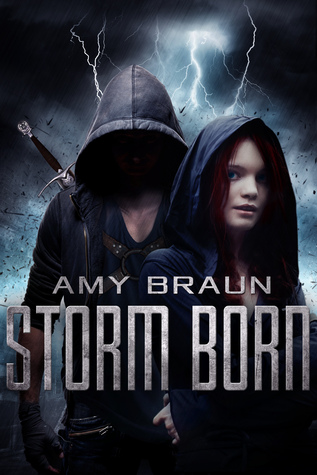 It’s been a century since the last Centennial Storm, the calamitous phenomenon that covered the world in disasters– tornadoes, hurricanes, blizzards, tsunamis, and dust storms– caused not by nature, but by alien creatures from another realm. The Stormkind.

Ava Reid tries not to think about that night, when she was caught in a hurricane and brought face to face with one of the Stormkind, the man with a dagger, and the agony she felt when he stabbed her with a crystal blade. Yet as she and the rest of Florida’s citizens begin to rebuild their lives, Ava can’t help but notice strange things happening around her. Things she seems to be causing. The gusts of wind and sudden floods attract the attentions of a mysterious stranger who leaves her clues, and the deadlier men following her.

It isn’t long before Ava is swept up into a wild conspiracy, led by a secret society that knows the truth about the Stormkind– and what their enemies have planned for the world she loves. If she wishes to protect her friends and her family, Ava must harness her strange new abilities and become part of the Stormkind society. Because if she loses control, there will be no force strong enough to stop her…

This book was so much entertaining and action packed. Loved the characters, setting and the writing.  This was my first book from Amy Braun and I’m quite impressed with her work. I was very intrigued when I first checked out this book’s cover and the blurb. Honestly, I hadn’t expected to enjoy it as much as I did.  I really loved the concept especially the elemental powers aspect and the author executed the plot in a way that’ll make readers engaged to the story through out. The action is totally epic and it’s the best part I loved about this book. Amy is definitely a talented and creative author and I seriously need to check out her other works.

Ava Reid’s world turns upside down when her city is hit by a centennial storm, a deadly calamity that causes massive destruction with it’s tornadoes, hurricanes, blizzards, tsunamis, and dust storms. It was rumored that the centennial Storms are actually caused by the alien elemental gods called stormkind but there were no sightings of them yet and anyone who encountered them are always turned out dead. When Ava gets caught in the hurricane at the night she comes face to face with a stormkind who stabs her with a crystal sword. Later, when she wakes up to find herself alive, she gets pretty surprised that she is still alive even after getting stabbed. She thinks maybe every horrible thing happened that night was just a dream but the strange mark on her chest proves that it wasn’t a dream. Few days later, Ava meets a mystery man who leaves her clues and she finds that her emotions are somehow causing havoc around her with the sudden winds and the floods. When some mysterious dangerous people tries to abduct her, she’s saved by the same mystery man who tells her that she’s now the stormkind and there’s a whole other world of secret society of stormkind who are willing to use her as a weapon. Caught between a war, Ava needs to harness her power not only to save herself and her family but also humanity.

I really liked Ava and her wittiness! She’s just an ordinary human girl who is suddenly gifted with an extraordinary power that is quite deadly. I loved the character development of her from being a vulnerable innocent girl to strong protagonist. Hadrian was hard to connect especially with his mysterious and broody personality but there’s something captivating about him that made me like him. I liked the relationship between Ava and Hadrian and I wish there was more romance in this book but it isn’t the major aspect of this book nonetheless I enjoyed it. I also liked Piper, she’s Ava’s best friend who is quite sarcastic and has fun personality. All the other supporting characters including the villains are the great addition to the plot cause they really made the story more enjoyable and interesting.

The plot was amazing! It was fully action packed and was hard to put down. The pacing is quite good and It definitely felt like watching a sci-fi action movie that kept me on the edge of my seat.  The concept was very unique and I enjoyed each and every part of it. I really liked the writing style, it was vivid and descriptive. The world building is simply great. The author has perfectly crafted a fictional world that felt very realistic and fascinating.

Overall, it was an awesome YA read! I had a great time reading this book and It’s a pity that it’s only a stand-alone cause It would make an amazing YA sci-fi series. I highly recommend this book to all the readers who love action packed Young Adult sci-fi novels.