The Solaris Empire found victory in the North and, at the cost of her heart and her innocence, Vhalla Yarl has earned her freedom. But the true fight is only beginning as the secret forces that have been lurking in the shadows, tugging at the strings of Vhalla’s fate, finally come to light. Nowhere is safe, and Vhalla must tread carefully or else she’ll fall into the waiting arms of her greatest foe. Or former lover.

This book is a roller coaster of emotions that made me undergone so many emotions. I rarely cry when reading books but there’s a tragic part in this book that very much moved me to tears. I still can’t digest the fact that he’s no more and I’m quite angered by the author for doing this to us. The Air Awakens series is an exciting journey that I’m really enjoying so far but the water’s wrath turned out to be less action packed and more emotional than it’s previous installments. Nonetheless it was an incredible read filled with lots of anguish, frustration, sadness, deceit and forbidden love.

Vhalla Yarl who used to be a library apprentice, windwalker and a hero is now a lady of the west living far away from the people who wants to control her. She finally earned her freedom after a glorious victory over the north but unfortunately it came with a price that totally shatters her. After getting her heart broken, Vhalla is living a calm life by working in a bookstore at the west and avoids anything to do with the south but when the mysterious knights of Jadar attacks her, she has no choice but to return to the south to get all of  her answers but it also means that she has to face her former lover Aldrik who is now engaged to a northern princess.

I really liked the Character development of Vhalla in this book. With each installment Vhalla is growing more strong, fearless, determined and mature. She’s done being a pawn and we can see her new side who wouldn’t give a damn and wouldn’t hesitate to stand up for what she believes is the right thing to do. Aldrik, our dark prince has also gone through a character development and I’m glad he finally came to his senses but I still can’t forgive him for what he did at the end of Earth’s end. At last, we finally come to know the dark secret he was hiding from the start and what’s his deal with the crystals. The romance is the second main aspect of this series and the relationship between Aldrik and Vhalla in this felt so intense and emotional. From the start, there’s always obstacles in their love and now finally there’s nothing that can keep them apart. As for the secondary characters, Fritz and Jax are great supporting characters that I always enjoy. Baldair is my favorite character in this series and always will be.

The plot is very intriguing with lots of feels that’ll leave you emotionally drained. The first half of the plot is a bit slow and the pace picks up at the second half with lots of things happening fast and there’s some sudden twists that are totally unpredictable. I loved the world created by Elise Kova and I really felt happy to get back in it. This book is written in third person female pov and I liked the writing, it was pretty good and improved.

Overall, it was amazing except for the tragic twist. The book ended with an awesome cliffhanger and there’s only one more book left for this series. So, I really can’t wait to read the epic finale which sounds fantastic and I already fell in love with the cover of Crystal Crowned which looks so beautiful that I can’t help sharing it below. 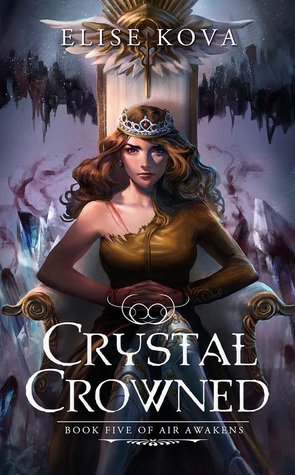