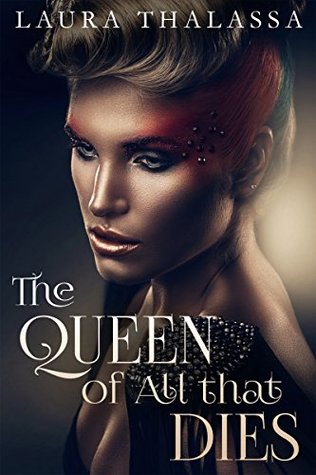 OMG! This book was insanely amazing and I loved it. It was so much better than I had expected and I immensely enjoyed reading it. The first thing that grabbed my attention was the captivating cover and the intriguing blurb. I’ve read only a few NA dystopian novels and It seems like I need to check out more books from this genre because I pretty much enjoyed all the books from this genre. The Queen of All that Dies has a unique concept and a gripping plot with great main protagonists. The main aspect of this book was the forbidden romance between enemies which was compelling and quite seductive.

19 year old Serenity Freeman is a soldier and also the future emissary of Western United Nations(WUN). War has taken away everything from her including her mother. Her father who is actually the current Emissary of their region is the only family she has left. Due to the war, the WUN is facing the starvation and radiation everywhere. For the last decade, King Lazuli of the Eastern Empire has systematically taken over the world and now his sights are set on WUN and looks like he won’t stop until they surrender. Nearly defeated, the WUN finally comes to a decision to have peace negotiations with the mysterious King Lazuli who cannot die and hasn’t aged since the war began. As WUN’s Emissary, Serenity and her father were sent to the enemy’s den for the peace negotiations. At the first meeting King Lazuli can’t keep his eyes away from serenity and he feels something that he never felt before but unfortunately she immensely hates him. Serenity can see the desire he feels for her but all she wants is to kill him and tries hard not to succumb to his allure.

Serenity is a kickass female protagonist in the plot. She is strong, tough, loyal, witty and fun character and I really liked her. Although she may be a tough soldier, she does have a vulnerable side and she sacrifices everything even herself for the sake of her country. King Lazuli is your ultimate compelling villain but there’s certainly something about him that makes it hard for us to completely hate him. He may be a ruthless guy to the outside world but in front of Serenity, he was totally a different person who really cares for her. There is a insta attraction but I think its acceptable for the plot. Serenity and King Lazuli are perfect for each other. Even though they are enemies to each other the chemistry between them is very intense and explosive. As for the supporting characters, they aren’t memorable but quite good for the plot. There is another male love interest but he was barely there and doesn’t have much part in the story.

I really liked the plot! It was interesting and thrilling that has hooked me from the start. The storyline is fast paced with full of action and hot romance that you can’t stop turning the pages. The writing was great and I flowed through it quite easily without any issues. The world building was good but it wasn’t mind blowingly amazing either. Both the MC’s are well built and I really enjoyed their hate/love relationship.

Overall, it was a fabulous read and I can’t wait to read the sequel. This book is not for everyone because you’ll either hate it or love it but still I’ll recommend this to all the readers who love reading New-Adult dystopian novels.