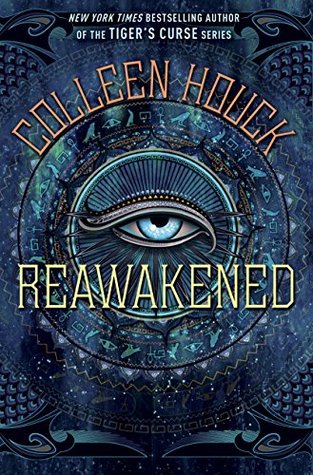 RELEASE DATE: August 11, 2015
AUTHOR: Colleen Houck
GENRE: Young-Adult, Fantasy, Romance , Adventure, Fiction.
PUBLISHER: Delacorte Press
SUMMARY: When seventeen-year-old Lilliana Young enters the Metropolitan Museum of Art one morning during spring break, the last thing she expects to find is a live Egyptian prince with godlike powers, who has been reawakened after a thousand years of mummification.  And she reallycan’t imagine being chosen to aid him in an epic quest that will lead them across the globe.   But fate has taken hold of Lily, and she, along with her sun prince, Amon, must travel to the Valley of the Kings, raise his brothers, and stop an evil, shape-shifting god named Seth from taking over the world.    From New York Times bestselling author Colleen Houck comes an epic adventure about two star-crossed teens who must battle mythical forces and ancient curses on a journey with more twists and turns than the Nile itself.

I’ve got mixed feelings about this book and  I don’t know how to describe my thoughts about it. I must agree it was an entertaining read but still I find there’s something lacking in it. I did liked the book but I think it could be much better. Reawakened was  adventurous and thrilling but honestly it wasn’t as good as Tiger Saga. The best thing I’d liked in this book was it’s concept which is completely new to me. After Reading Tiger Saga, I highly anticipated for it’s release cause I haven’t read any book about Egyptian mythology before and  it’s synopsis sounded very much intriguing. Even though it didn’t reached my expectations, it was enjoyable read and I’m glad that it wasn’t totally disappointing. Lilliana Young is a 17 year old rich girl from New York who stumbles upon a real Egyptian prince in a museum who reawakens from his 1000 year slumber. For every 1000 years, Amon(Egyptian prince) and his two brothers reawakens to stop the rising of evil god named Seth. This time something goes wrong when Amon finds himself reawakened in New York but not Egypt and he is in desperate need of  help from Lily to save the world and also to find his other two brothers to reawaken them before it’s too late. Fed up by her boring rich life Lily really wants to have some adventure in her life so after some heavy persuasion she finally agrees to help the prince and travels across the globe for an adventurous ride but she never expected to fall in love which can never be possible between them.

The Character Lily is so much similar to Kelsey from Tiger saga but I think Lily is less annoying than Kelsey who I really hated. Even though she is better than kelsey, she isn’t great either. Lily is a courageous character but she is a delicate flower who always needs protection and the thing I hate the most about her was her over attraction towards Amon who has rejected her feelings so many times. I really liked Amon, he is perfect egyptian prince who was quite arrogant at start but slowly you’ll come to like him as the story progresses and I think many people wouldn’t like him manipulating Lily. I know what he did was wrong but he’s got no choice left because he’s got to save the world and the only person who can help him was her and he’s got not much time left either. As for the romance part, there’s not  much in it which is quite surprising and you’ll find most of it at the end. Asten and Ahmose who are Amon’s brothers are the other two characters that I really liked knowing especially Asten who reminded me  a lot of Kishan from the Tiger Saga.

The plot is not entirely unpredictable but it did surprised me a lot of times. The characters are quite good but not that great. I don’t know whether the Egyptian mythology mentioned in this book is genuine or fictional but still I really enjoyed knowing about the Egyptian gods. Though most of the book was set in Egypt, I didn’t get to know much about Egyptian culture which is a bit disappointing cause I was really looking forward to it. The writing was captivating and much more improved. The first part of the book is mostly slow paced but the second part is fast paced action packed which is the best part that I really enjoyed reading the most. I think it’s a good start for a new series and I’ll look forward to read it’s sequel. FYI you won’t find any rotten mummies chasing  scenes in it.

Overall, it was entertaining and adventurous read that you would definitely enjoy reading it. The ending of the book was totally unexpected and I really want to know what’s going to happen next. If you love reading adventurous books with light romance then I highly recommend you to read this book.