RELEASE DATE: September 29, 2015
AUTHOR: Leigh Bardugo
GENRE: Young-Adult, Fantasy, Adventure, Fiction.
PUBLISHER: Henry Holt and Company
SUMMARY: Ketterdam: a bustling hub of international trade where anything can be had for the right price—and no one knows that better than criminal prodigy Kaz Brekker. Kaz is offered a chance at a deadly heist that could make him rich beyond his wildest dreams. But he can’t pull it off alone…

A convict with a thirst for revenge.

A sharpshooter who can’t walk away from a wager.

A runaway with a privileged past.

A spy known as the Wraith.

A Heartrender using her magic to survive the slums.

A thief with a gift for unlikely escapes.

Six dangerous outcasts. One impossible heist. Kaz’s crew is the only thing that might stand between the world and destruction—if they don’t kill each other first.

Leigh Bardugo has done it again!!! This book is so amazing and it is definitely going into my best books I’ve read this year list. Grisha Trilogy is one of my favorite trilogies and I’ve waited  ages to read Six Of Crows. I had some slight issues while reading it but still it was enjoyable read and I really liked it. This book has amazing plot with great characters where each of them has their own unique identity. It may be a spin off series of Grisha Trilogy but you need not have to read it before reading this book but I would recommend you to read it.

The Story is about six outcasts who are planning to do an impossible heist which can also be regarded as a suicide mission where the probability of them succeeding or rather surviving is very very low. Each of them has their own reasons to join in the heist because if they really get succeeded all of their life’s will change forever.

The characters, the plot and the world building are the best parts of this book. This book has 6 main characters but it was written in 5 POV’s. Actually I don’t read books with multiple POV’s and I was afraid that I wouldn’t like it but Miss Leigh has done a great job in creating characters with unique personalities and she did so well in portraying them.

KAZ: A thief with a gift for unlikely escapes. Kaz Brekker, also known as dirty hands and Bastard of the barrel is the most deadliest person in Kettardam. He is the genius mastermind behind the heist who is very clever and it’s really a wonder how he come up with backup plans so quickly. I had hard time getting connected to him but I really liked his mysterious persona. At the beginning, he appeared to be a cold hearted person who doesn’t have any feelings but when I finally learned about his dark past I felt really sad about what happened to him. He always wears poker face to the outside world so that people fears him but inside he is just a normal guy who’s got some issues.

INEJ: A spy known as the Wraith. I loved all the characters in this book but if someone made me  pick a favorite then I would definitely pick her. She is a kickass character who is very good in blending with the shadows and that’s why she earned the name the wraith. Not only she was good at spying she is also quite deadly in fighting too. She is the only person in ketterdam who possess deadly secrets and also the only reasonable person in the group and I totally love her and  her suli ways.

NINA: A Heartrender using her magic to survive the slums.

Nina is another kickass female character in this book who is actually a grisha gifted with many powers that I would love to possess. She is quite seductive in nature and always likes to flirt with everyone. Besides being flirty, she is very friendly, humorous and caring person. I really enjoyed the way she taunts Matthias.

MATTHIAS: A convict with a thirst for revenge. You can say he is  pretty much angry bird in the team who’s mind was always set on revenge. He is an ex-drüskelle( Fjerdan witchhunters tasked with hunting down Grisha to face trial and execution) who ended up in prison due to a betrayal. He doesn’t get along well with the others and doesn’t trust any one but he’s got no choice but to help them cause succeeding this heist might bring back his life. It was very saddening how he endured the prison life which was very cruel and extremely brutal. Basing on the description he is quite a hot guy even though he is bald and I would love to know more about him.

JESPER:A sharpshooter who can’t walk away from a wager.

Jesper is the joker of the team. He might be funny but during in action he turns into a kickass shooter. Besides Shooting, he likes to tease Wylan who he thinks is a whiny kid and nothing but a burden for the team but eventually they become good friends.

WYLAN: A runaway with a privileged past. 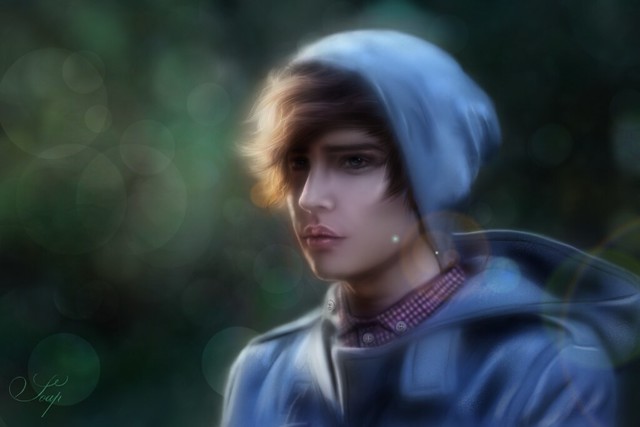 Wylan is a sixteen year old boy who came from a privileged family, brought up in luxury and  completely new to the outside dangerous world. He may not possess any deadly skills but he is very good at using flash bombs which helped the team escape a lot of times. When he was first introduced, he acted like a 10 year old wimpy kid and I didn’t gave him much attention but later on I began to like him more and I really wished there was a POV of him. I can understand it was necessary for the plot but I hope there would be a POV of him in the sequel.

All the characters are well-developed and well portrayed. As for the romance part, there are actually two relationships but I’m not sure about the third one. The plot was fantastic! It was unpredictable and there are so many twists and turns that you wouldn’t want to put it down for a second. Besides the characters, the world building is another highlight of this book which is very creatively done. The story mostly takes place in Kettardam and the Ice Court. At the beginning, I was a bit struggled with the names of some places and some terms but slowly I got used to them. The writing was fantastic as always but my only issue was somewhere in the middle, things got really slow with nothing happening and I was really bored but later on the pace picked up and it was all good till the end.

Overall, It was amazing read as expected. It was a great start for a new series. I had great time reading this and now I bloody need that second book right now cause things took a interesting turn and I really hope there would be special appearances especially Nikolai and Alina from Grisha Trilogy. This book is a full package of  action, suspense, and intrigue that you wouldn’t want to miss. If you haven’t read this book yet then I strongly advice you to read it.