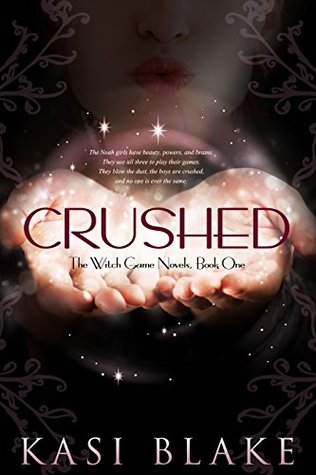 RELEASE DATE: August 4, 2015
AUTHOR: Kasi Blake
GENRE: Young-Adult, Fantasy, Romance, Witches, Magic.
PUBLISHER: Clean Teen Publishing
SUMMARY: The Noah girls have beauty, powers, and brains.
They use all three to play their games.
They blow the dust,
the boys are crushed,
and no one is ever the same.

Each year the Noah girls play a secret game— Crushed. The rules are simple.

1. Use wisdom to pick your target. The boy can’t be too weak or too strong-willed.
2. Blow the enchanted dust into your target’s face to enchant (Crush) him.
3. Give verbal commands and assign them tasks to perform throughout the year. The more tasks completed, the stronger the witch’s power grows.
4. At the end of the year, the witch with the most power wins cold, hard cash.

As if being a witch in high school isn’t complicated enough, Kristen picks the wrong boy to Crush. Zach is tall, handsome, and a little scary. Her Crush spell isn’t working on him like it has with the others. In fact, he is behaving the opposite of every other boy she’s Crushed, hating her instead of adoring her. Something is definitely wrong. After someone attempts to kill her, Kristen realizes there is more at risk than a few hundred dollars. She may be betting with her life.

MY REVIEW:
Crushed is really an entertaining read. This is the first book I’ve read from the author and I really liked it. When I first read the synopsis, I knew I had to read this book because it’s been a while since I’ve read a witch themed book. Some of the aspects in it may seem cliched but I totally enjoyed reading it and just finished it in one sitting. I think this book can also be read as a stand-alone cause the sequel to it has new cast and new story and I’m looking forward to read it too.

Kristen Noah and her sisters Cyndi, brittany are triplets but also witches and they are popular Noah girls in Titan High School. Every year they play a witch game called Crushed where each of them finds a target and blows a pink dust on the target’s face to make them enchanted and charmed enough to do any task they have asked. When Kristen is challenged by Brittany to crush Zach Bevien, the very bad boy of the school, she accepts the challenge and chooses him as her target. When Kristen blows the enchanted dust on Zach it does a opposite effect on him because he isn’t acting how she has expected and his unpredictable actions make her confused and she thinks there’s  something odd about him. She doesn’t know Zach isn’t what he appears to be and he’s got his own secrets to hide.

Kristen is pretty much likeable character we can relate to but she did acted over dramatic sometimes though. She is the good girl in the group who always gets high grades so that she could impress her father who is a total control freak. Zach is a strong character who has a  captivating personality that is totally swoon-worthy and he is my favorite character from the book. He pretends to be enchanted by Kristen so that he could teach her a lesson later. It was totally hilarious how Zack reluctantly does every ridiculous tasks she commands and I’d wish there was more of their pretend play. I really enjoyed Zach and Kristen’s relationship. There isn’t insta-attraction and their relationship develops slowly while they get to know more about each other better. I’m so glad that it was written in both Kristen’s and Zach’s POV and it’s best thing that I’ve liked about this book.

The plot was quite good and there are some twists and turns in it to keep the readers engaged with the story. The pacing of the plot was also good and the unknown identity of the evil witch has made the story more mysterious. The author does have a great writing style and I enjoyed reading it. I really liked all the characters in it and also the way sisterly bond portrayed in it. At start, I was pretty much confused with the relationship between Kristen and Brittany who has mood swings but the end made up for it. There’s a great character development at the end when the triplets finally regretted about abusing their powers and playing with people’s emotions. Although it was well executed plot, I felt something missing but I can’t put my finger on it.

This book is full of romance, humor and intrigue. Overall, it’s a great read but It wasn’t perfect either. Nonetheless, I had great time reading this and I would definitely recommend it to everyone.