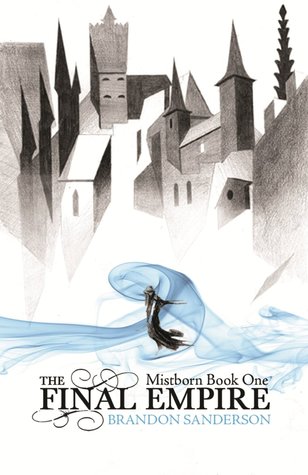 RELEASE DATE: March 30, 2010
AUTHOR: Brandon Sanderson
GENRE: Fantasy, Adventure  Magic.
PUBLISHER: Gollancz
SUMMARY: A thousand years ago evil came to the land and has ruled with an iron hand ever since. The sun shines fitfully under clouds of ash that float down endlessly from the constant eruption of volcanoes. A dark lord rules through the aristocratic families and ordinary folk are condemned to lives in servitude, sold as goods, labouring in the ash fields.

This book was absolutely fantastic and Epic. The highlight of this book was it’s amazing world building. It’s got a brilliant plot and well-written characters. This book may seem hard to get into especially with the world building and all the info dumping. It really took a lot of time for me to get into it and grasp everything about how Allomancy works. It’s an engaging read and enjoyed  every moment in it. I must say, this book shows the fabulous creativity of the author and definitely lives up to all the hype.

The Story was set in Luthadel, which was ruled by the Lord Ruler who claimed control over the world since thousand years ago. The people in Luthadel are divided into two Classes, the Noblemen and the skaa, the peasants who are enslaved by the nobles. Some Nobles has the gift to perform Allomancy, Allomancy is nothing but burning of various metals inside the body that can give power to soothe, rioting emotions etc. Mistborn is someone who can use all the metals which is really a rare gift to have. Inter-breeding between the Noblemen and Skaa has been forbidden to avoid the gifts passed down to a skaa. People who wouldn’t obey the rules are cruelly executed. There are  obligators, they punish people who doesn’t obey the rules and also the steel inquisitors, who are very scary looking with all the intricate eye tattoos and spikes sticking out of their eye sockets. Steel Inquisitors are somewhat dangerous assassins who can detect allomancers and they’ll  kill any hybrid skaa who possess the gift of allomancy without any mercy. Many Skaa rebellions have tried to overthrow the evil Lord Ruler before but every time they are utterly failed. Now a new rebellion has born which is led by a mistborn who is also the sole survivor of hathsin.

Vin is a skaa, she is a street urchin who only depends on herself and never trusts anyone because she thinks everyone will betray her. She is a member of a thieving crew and only female in the group. She is a strong female character who has survived on the streets with her luck and cleverness. I’ve really liked her character in it,  going through all the hard life and abuse had made her strong and clever. Her fate completely changes when she meets Kelsier who claims that she is actually a Mistborn, a rare gift only passed down to the noble bloods. She becomes the apprentice of  kelsier, who is also a mistborn and trains under him. After meeting Kelsier she comes to know what friendship really means and slowly begins to trust people. Elend, who belongs to nobles class is a romantic interest of Vin and I always look forward to their interaction because they’d make a cute couple.

Kelsier, who is also a skaa is another main protagonist in the book. Several years back he was a famous thieving crew leader in the Luthadel who can pull any heist. After getting caught by the Lord Ruler himself, he was sent to the pits of hathsin which is equivalent to a death sentence because no one has ever survived after getting into the pits. Miraculously, Kelsier is the only one who escapes from the pit  making him the only “Survivor Of Hathsin”. After several years, he is finally back with a new plan along with a crew of masterminds to overthrow the Lord Ruler and free the Skaa. Kelsier is a great character in the plot, he is very determined and never loses hope despite all the odds against him or how bad the situation maybe, and I always enjoyed his smugness and humor.

This book has a fantastic plot which was intriguing and engaging through out. Even though it was a long book I wasn’t bored anywhere because of it’s interesting plot which was written in both Vin and Kelsier’s POV. The pacing of the plot was really good and I really liked the main characters including all of the supporting characters in it. I also liked the magic system in it which was quite unique. The world building was really amazing and applaud worthy. The writing style was excellent and vivid. There is also a huge character development of Vin at the end. The Lord Ruler is quite a mysterious character who brings mystery to the plot because he isn’t revealed until the end of the book and from the start I was highly anticipating for his entrance. All the action sequences in it are well-written and the final confrontation was really great. I must warn you though there are some violent scenes with blood and gore in this book.

Overall, I totally loved it! It’s a perfect fantasy book with lots of action, adventure, fantasy and intrigue that you wouldn’t want to miss. After getting my mind blown by this book, I can’t wait to read the sequel to it. It’s a must read for every fantasy lovers and highly recommended to everyone. Even if you aren’t into fantasy genre just give this book a try.