Hello there! Welcome back to another weekly manga recommendation. Today’s recommendation is another favorite of mine titled Crazy Girl Shin Bia By Hwang Mi Ri.

AUTHOR: Hwang Mi Ri
NO.OF VOLUMES:  19 Volumes
STATUS: Completed
GENRE: Shoujo, Historical, Time-Travel, Martial-Arts, Romance, Comedy.
SYNOPSIS: Beautiful girl Shin Bia has always been alone, so she has had to learn how to stand up for herself and now she’s even stronger than boys in her neighborhood.

One day a strange tornado surrounds her and a necklace falls on her head. Soon she starts having dreams about a girl dressed in magnificent clothes. The girl looks just like Shin Bia and she seems to think she is about to die. The necklace is also present in the dreams, so they are connected somehow.

When a few days later Shin Bia is kidnapped by a group of rich boys, she decides to jump from a window before something horrible happens. But… she doesn’t die! Instead she finds herself in an old-fashioned world where men are stronger and far more train in the art of fighting than her.

Soon enough she is found out by prince Joo Baek and he mistakes her for his fiance, Celestial Bia, who has been thought to be dead in a recent attack. Bia is taken to the palace, where she will learn what “palace intrigues” really means as she tries to find out why she is there and how to go back to her world. Of course, she will have to deceive them all!

MY OPINION: Crazy Girl Shin Bia is another time-travel romance manga from Hwang Mi Ri. The best thing about this Manhwa[korean Comics] is it’s beautiful art and characters. Shin Bia is hardheaded and stubborn girl who may seem annoying sometimes but she always stands up for what she wants. The Prince has a regal personality who looks quite powerful and appealing. All the other characters in it are good too especially Mu Yeong and Yoo Hui(Joo Baek’s half brother). The pacing of the story may seem slow at start but it’ll get better later. Overall, I loved it! So, I highly recommend it to everyone who like reading Historical or Time-Travel romance. 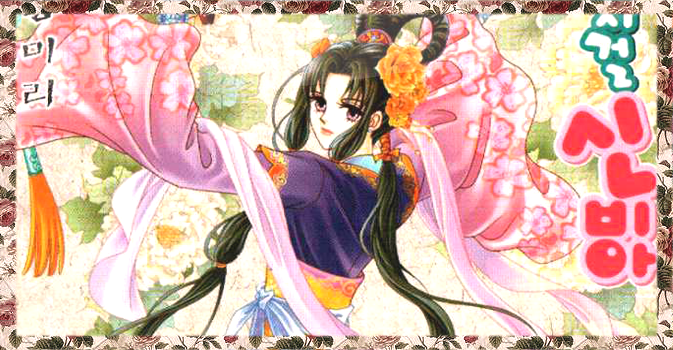