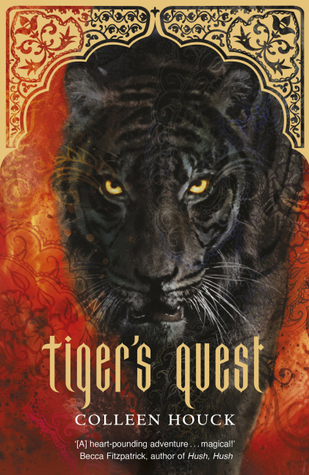 RELEASE DATE: June 7, 2011
AUTHOR: Colleen Houck
GENRE: Young-Adult, Fantasy, Mythology Paranormal, Romance.
PUBLISHER: Splinter
SUMMARY: Back in Oregon, Kelsey tries to pick up the pieces of her life and push aside her feelings for Ren. But danger lurks around the corner, forcing her to return to India where she embarks on a second quest. This time with Ren’s dark, bad-boy brother Kishan, who has also fallen prey to the Tiger’s Curse.

Fraught with danger, spellbinding dreams, ad choices of the heart, Tiger’s Quest rings the trio one step closer to breaking the spell that binds them.

MY REVIEW:
I have mixed feelings for this book because I both loved it and hated it. The sole reason for my hate for it was kelsey, who seemed so much more annoying than the previous book. The quest for breaking the 300 year old Indian curse continues with a new adventure. In this, Kishan and Kelsey journey together for the next quest where we get to know more about Kishan which I’m anticipating. Despite not liking Kelsey, I’ve really enjoyed reading it and loved all the adventure in it.

The book continues where it was left off. Even after Coming back to Oregan, Kelsey is tormented by the memories of Ren after she rejects his feelings before leaving for Oregan just because she thinks he is too good for her. To get over Ren and give herself another chance in love, she dates three guys even though her mind and heart is filled with Ren and except for Li, the other  two guys she dates are total jerks. The first 30 percent of the book was focused on the normal relationship drama between Ren and Kelsey. Ren moves to Oregan just so he could prove her that his feelings for her are real and requests her that she should give him a chance too. Honestly, I think she doesn’t deserve both guys I mean how can she doubt Ren’s feelings for her when everyone can clearly see how he was head over heels in love with her.

I don’t know why miss Houck created such dimwitted and annoying character for this series. Another thing that made me hate her more was her mixed feelings for both Ren and Kishan. In Tiger’s Curse, I really adored Ren and Kelsey’s relationship but now I’m pretty much doubting her feelings for Ren because she easily succumbs to Kishan’s charm and Kisses, I wouldn’t blame her for it because he is alluring but still I’d expected her love for Ren to be strong. The triangle thing in it seemed very much twilightish you know what I mean. Kishan was introduced as Cocky, over confident and proud character but in Tiger’s quest you get to see the vulnerable side of him which made me like him more and he seemed no different than Ren. I must agree, Kishan was an appealing character in this series but I would always root for Ren. I really missed Ren in this book because he doesn’t have much part in this plot and this time it was more about Kishan and Kelsey.

Danger reaches to the Oregon and Kelsey was once again back in India but due to some circumstances (which I’m not going to reveal) She and Kishan has to travel together for their next quest. The quest in this book was both interesting and more dangerous than the previous one and I really liked the place known as Shangri-la. In this journey, Kelsey and Kishan gets more closer and Kelsey can’t deny her feelings for Kishan but she still loves Ren which I totally didn’t get it at all. It’s like history repeating where both guys once again fell for the same girl Argh!. I wouldn’t mind even if both of them didn’t end up with her.

Despite all my issues with this book, I’ve really liked it. The plot was engaging enough to continue reading it and I always enjoyed the adventures in it which was the best part I’m liking in this series and not to forget Ren and Kishan too. The end was totally shocking and unexpected too, I can’t wait to read the next in the series and I hope their next quest would be much more exciting. I highly recommend this series to everyone who are looking for a good adventurous book with a mix of romance.