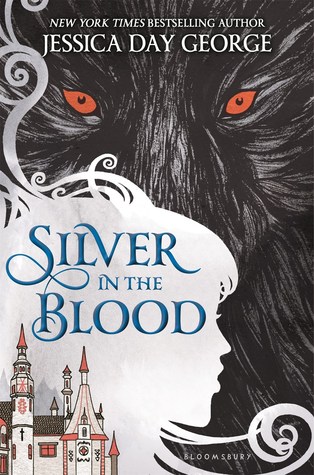 RELEASE DATE: July 07, 2015
AUTHOR: Jessica Day George
GENRE: Young-Adult,Fantasy, Historical, Paranromal.
PUBLISHER: Bloomsbury USA Childrens
SUMMARY: Society girls from New York City circa 1890, Dacia and Lou never desired to know more about their lineage, instead preferring to gossip about the mysterious Romanian family that they barely knew. But upon turning seventeen, the girls must return to their homeland to meet their relatives, find proper husbands, and—most terrifyingly—learn the deep family secrets of The Claw, The Wing, and The Smoke. The Florescus, after all, are shape-shifters, and it is time for Dacia and Lou to fulfill the prophecy that demands their acceptance of this fate . . . or fight against this cruel inheritance with all their might.

I hoped that I would  enjoy it a lot more than I expected but it didn’t reached my expectations at all 😦 .It wasn’t bad but it wasn’t mind blowing either.It was one of my highly anticipating books and it was such a disappointment that I didn’t enjoyed it  that much.The plot started a bit slow and draggy and I was almost DNF’ng it but the second part  turned out to be much better making it worth continuing it.

The plot was refreshing and unique for the genre and it has a lot of potential to it.Imagine vampires and werewolves in a 18th century of Romania—  sounds intriguing right? and that was enough for me to pick this up.The story mostly takes place in Bucharest and the author did great in blending it with Vlad Tepes history who is also known as Vlad The Impaler or Dracula.The story was quite predictable I don’t understand why it was necessary to dragging it till the second half of the book.

The story was about two cousin sisters Lou and Dacia who were very close to each other but they are quite opposite in nature.Lou and Dacia both of them were grown up in America and they didn’t know any thing about their ancestors or their family’s dark secret.Upon turning 17, Lou and Dacia were ordered to meet their relatives in Romania.Both of the girls are totally against it because they  wanted to take a trip to Paris together.During their journey  to Romania, some disturbing events occurs which makes both of them baffled about it.Lou gets her own stalker and Dacia gets the attention of a mysterious handsome prince who knows Florescus family very well. After the revelation of the dark secret of their lineage, they couldn’t believe that their family are actually shape shifters and they are caged in the house by their own relatives to fulfill a prophecy.Lou and Dacia  didn’t give a damn about the prophecy and they try to figure out how to escape from this legacy and have their normal life back.

The characters Lou and Dacia possess different personalities where Lou is shy,good mannered, intelligent girl and Dacia is a strong, wild, carefree, reckless and bold character.Even though they are  both different in nature but they are very close as sisters. I’ve liked Lou more than Dacia because Dacia is quite annoying and she is a bit crazy about handsome man I mean she already have a beau in New York and she flirts and hangs around with other guys.The other supporting characters are not  portrayed in depth though I’d liked to know more about Arkady AKA Theo and Johnny.

The story mostly focused on  both sisters adventure and there’ll be little bit of romance in it but not much cause the author gave least attention to it.The first part of the plot was pretty much slow paced and draggy which made me bored a lot but the second half was fast paced with all the action present in it so it was worth it.It was narrated in both Lou and Dacia POV which was quite helpful in understanding their personalities better and we can also see how they look out for each other. The plot was very creative and imaginative but I find something lacking in it but I couldn’t put my finger on it.

The author gave a vivid description of the 18th century Romania and I’ve truly enjoyed reading it while imagining it myself.I was a bit struggled with her writing though but it was quite creative and understandable.I’m a avid reader of paranormal novels and after reading this, I don’t think I can continue with this series cause It isn’t exciting enough for me or may be I really have high expectations.Overall, I think it’s a good fantasy/paranormal book set in regency times and If you  want to read this —don’t mind my thoughts just read it may be you’ll like it more than me. 🙂