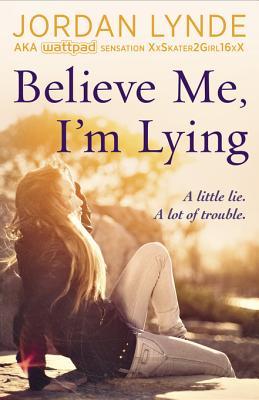 TITLE: Believe Me, I’m Lying
RELEASE DATE: January 1th 2015
AUTHOR: Jordan Lynde
GENRE:Young-Adult, Contemporary, Romance.
PUBLISHER: RHCP Digital
SUMMARY:When seventeen-year-old Harley’s parents are killed in a car crash, she’s desperate to find work so that she can support her little brother, Elliott. Pretending to be twenty-one, Harley accepts a role as a teacher – at a school for delinquents. It’s tough – but life gets even more complicated when Harley starts to have feelings for not one, but two of her students . . .

MY REVIEW: It’s a fun read that I think many readers would enjoy it and some may not.I picked it only because I like reading not only  published books but also the wattpad stories where it has no end to the imagination.The blurb was what got me interested in the book and also it being a wattpad story. Honestly, I liked the book but the environment I had expected in the plot was absent in it.

Harley is a tough character that I’ve liked very much who has gone through so much, but still she stood strong and took care of her little brother. She is a 17 year old high school girl and due to the tragedy of her parents death she dropped out of school even before completing her high school just so she could take care of her only little brother.Currently She is home schooled and is in desperate need of a job so that she can provide for herself and her brother or else her other choice would be  foster care that she is so much against of. Every where she is turned down just because she was too young for the job.When a job is offered  for being a sub teacher and the qualification is any one who is a high school graduate she lies about her age and education by providing fake certificates stating her being 22 years old of age. She accepts the job with no knowledge that the school is actually a school for delinquents. She was very careful from being caught unfortunately she was found out by one of her student who hated her most in the class.

Ok, I love the plot and the way it started it was great with them bullying the teacher as expected from delinquent students.At the beginning it was going alright, but later on it went down hill when there is sudden change in the characters behavior, they seemed more like  normal students so the atmosphere felt like a normal high school not some school for delinquents.I expected them to be violent and aggressive, but they only looked aggressive on the outside but inside they are sweet as a sugar candy *augh* totally unexpected. Harley wears spectacles to disguise her young 17 year old look, but still they didn’t hide her youngness that much cause everyone asks her “are you really 22 because you don’t look like 22”. After some time, she develops a friendly bond with the students and hang outs with them which didn’t seemed realistic to me.

There is another character that I’ve liked so much in this plot his name is  Eliott, the little brother of Harley who always calls her “Pig” but not Harley, and I loved how the author portrayed the brother and sister love between these two which was so sweet and adorable. The supporting characters are somewhat ok but not that great.Harley got a mixed feelings for two guys which is annoying as hell because I wasn’t even aware that she had developed feelings for them because you can only find the presence of attraction between the characters but not of any budding romance.I hoped there was more romance in this cause there isn’t much in it only at the ending phase.

Overall, I think it was not that bad but could be better but it was a entertaining read and  also  if you are a wattpad reader then you’ll definitely like this book. The author’s writing style is not creative but easy to understand.I would recommend it if you are looking for some fun and entertaining read but don’t expect too much.

Please feel free to share your thoughts or comments below 🙂
See you next time with a new post 🙂
Happy Reading! 🙂

2 thoughts on “Believe Me, I’m Lying by Jordan Lynde”