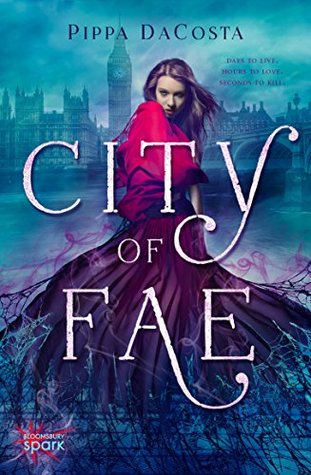 RELEASE DATE: May 7th 2015
AUTHOR: Pippa DaCosta
GENRE:New-Adult,Paranormal,  Fantasy, Fae, Romance.
PUBLISHER:Bloomsbury Spark
SUMMARY: From the moment Alina touches London’s hottest fae superstar, breaking one of the laws founded to protect all of her kind, her fate – and the fae – close in.

Below ground, the fae High Queen plots to claim the city as her own and places her pawns, ready for the battle to come. A battle she cannot lose, but for one small problem – Alina. There are four ancient keepers powerful enough to keep the queen in her prison. Three are dead. One remains … And to fight back, Alina risks sacrificing everything she has come to love.

I picked it up only because of the cover and also because the blurb mentioned that it has a  hot and sexy rock star fae in it. I like fantasy books containing fae and of course this one stands out with its beautiful cover so obviously  there’s no happening of me not reading it.Although it isn’t perfect but it was an entertaining read with a unique plot.

The story takes place on the modern day London where fae gets to live among the humans. Humans were forbidden to touching them because if a human touches a fae then their life force known as draiocht would be sucked out from them and they also might bespelled by them which ultimately turns them into slaves.To prevent the enslavement of the humans, the Fae Authorities FA and the government has placed three laws called Trinity Laws which must be obeyed by every human they are

The character Alina is a 19 year old girl who’s got lots of sass, wit and  humor in her. She is a well crafted character that I liked to know, and we can see her develop as the plot moves further.She’s an ex-reporter who recently got fired from her job. She didn’t believed her eyes when her paths crosses with “Sovereign” the number one hot superstar fae in London. She sees him in a vulnerable state  at the empty train station, and he seems to be  hurt which is a surprise cause Fae are far more stronger than humans. Not only meeting Reign isn’t a total surprise in her life, she broke trinity’s first law by touching him. After meeting Reign, her life wasn’t the same anymore, weird things starts to happen around her and she demands Reign for the answers, and she’s astonished  after finding out that there are so many secrets that the fae are hiding.

The Character Sovereign is a sexy hot singer who oozes with captivating charisma, and he likes to flirt with Alina which both annoys her and also makes her hot. I think the author portrayed his character perfectly well. Reign is always protective towards Alina and he also has some deep secrets that Alina wasn’t aware of. The fae magnetic attraction and chemistry between them is quite steamy, but there isn’t any explicit scenes in it and I definitely think it can also be suitable for Young Adults because I’ve seen more hotter scenes than this in J.Lynn’s YA novels.

I liked how the author wielded the story but one thing I don’t get it is, was the queen and her creepy spiders because I’ve expected something different.The Fae in this plot doesn’t have any wings yeah you heard me right no wings which is somewhat disappointing but they do got sexy color changing eyes,pointy ears beautiful face and super powers.There was also mentioning of the faerie realm and the reason about how did they got into London in the first place.There are also some twist and turns in this that you don’t see it coming.

Overall Nice story building and good writing skills.I’m really impressed with her imagination, her descriptive power, and her ability to create truly engaging characters but I felt something lacking in the supportive characters.The best thing I liked in this book is the kickass action which is very exciting and also the thrilling finale scene at the concert.I don’t know why so many people hated it, yeah I agree it has some flaws but it isn’t that bad. I don’t know whether it is a stand-alone or not, but the way it was ended I think it may have a sequel which I  might read if it is published. So, I’ll definitely recommended it to readers who like Fae genre.

8 thoughts on “City of Fae by Pippa DaCosta”