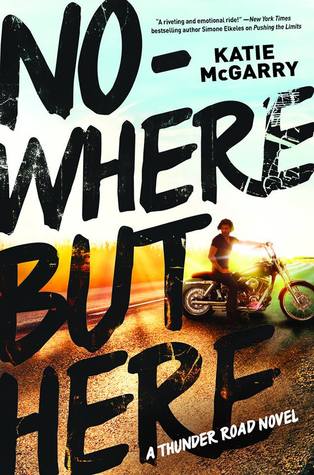 RELEASE DATE: May 26th 2015
AUTHOR:Katie McGarry
GENRE:Young-Adult, Contemporary, Romance.
PUBLISHER: MIRA Ink
SUMMARY: Seventeen-year-old Emily likes her life the way it is: doting parents, good friends, good school in a safe neighborhood. Sure, she’s curious about her biological father—the one who chose life in a motorcycle club, the Reign of Terror, over being a parent—but that doesn’t mean she wants to be a part of his world. But when a reluctant visit turns to an extended summer vacation among relatives she never knew she had, one thing becomes clear: nothing is what it seems. Not the club, not her secret-keeping father and not Oz, a guy with suck-me-in blue eyes who can help her understand them both.

Oz wants one thing: to join the Reign of Terror. They’re the good guys. They protect people. They’re…family. And while Emily—the gorgeous and sheltered daughter of the club’s most respected member—is in town, he’s gonna prove it to her. So when her father asks him to keep her safe from a rival club with a score to settle, Oz knows it’s his shot at his dream. What he doesn’t count on is that Emily just might turn that dream upside down.

No one wants them to be together. But sometimes the right person is the one you least expect, and the road you fear the most is the one that leads you home.

MY REVIEW:  I Can’t believe myself that I’m giving it a less than  4 star rating. I’ve had so many expectations with it and this one didn’t fulfill it.It was one of my higly anticipated book.I neither hated it or loved it but It was likable and nice read and nothing new except the MC thing.I had high hopes with it because it was written by Katie McGarry the one who wrote the awesome series “Pushing The Limits”.

I’ve expected something like bike chase, guns, forbidden romance and some adrenaline rush, but 80% of the book is covered with the romance between Emily and Oz and some MC stuff. All the fast paced action I was expecting to be happen was located at the last remaining 20% of the book.

The book was narrated in both Emily and Oz pov. The three major protagonists in this plot are Emily, Oz and Olivia. More than half of the book is slow paced and guess what its nearly 500 pages long book.

And as for the characters honestly I didn’t liked any of them even Oz the hot biker guy. Only Razor seemed kinda interesting.Emily was kinda OK character and Oz is a tough guy and a total perv who has a high blush worthy imagination whenever Emily is in his closed space.Oz gets attracted towards Emily even knowing it was forbidden and going further will bring a lot of trouble for him.The chemistry between these two is hot and steamy and you won’t find any of it lacking  in that department.

The Story starts with sweet and innocent Emily who lives happily with her  mom and adoptive father Jeff who was like a real father to her.When she gets an unexpected message from her biological father Eli who is also a part of  MC all her summer plans were ruined, because now she  got to attend the funeral of her grandmother Olivia who she didn’t met before, and a father who abandoned her mother when she was pregnant with her. When Emily arrives to Eli’s house she was in for a surprise. Eli didn’t expected this  visit and now he has to save her daughter from the rival gang club and also  prevent her from knowing the past that was hidden from her. When Emily finds out that all the things her mother said about her father was a lie, She begins to find the real truth and reveal the past that was restricted for her to know.

Half of the book is slow paced and most of it was focused on the attraction between Emily and Oz and how their feelings developed and became strong.Oz at the beginning hated Emily but we know that opposites always attract.I wouldn’t say it was bad cause I really do liked it, but it would be much better if there was more action in it.Finally the book ended with a HEA which is one of the positive thing in this plot.

Anyway, I want to give this series another chance with Razor who seemed quite mysterious and interesting.I don’t know myself if I could recommended it or not, but do give it a try  and judge yourself may be it will be to your liking.