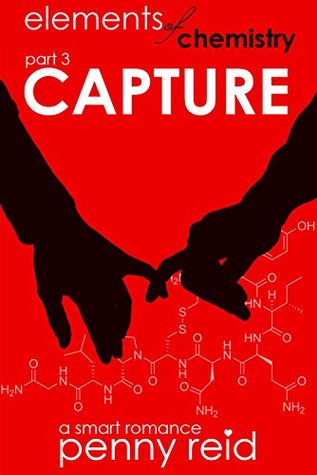 RELEASE DATE: May 8th 2015
AUTHOR:Penny Reid
GENRE:New-Adult, Contemporary, Romance.
PUBLISHER: Cipher-Naught
SUMMARY: One week.
Manhattan apartment.
Super-hot ex-boyfriend.
…What’s the worst that could happen?
It’s been nine months since Kaitlyn Parker has seen or heard from Martin Sandeke—nine months and five stages of matter. She’s lived through the worst of first-love heartbreak, and is most certainly stronger (and less likely to hide in science cabinets) than ever before.
But now Martin is back. And he wants to be friends. But he’s sending mixed signals to the Bunsen burner in Kaitlyn’s pants.
Will Martin re-capture Kaitlyn’s heart? Can Kaitlyn and Martin ever be just friends? Or, despite an abundance of chemistry, are some bonds just too unstable to endure?

MY REVIEW: It is the final installment in the series and I’m feeling great that I’ve finished reading this series.

Penny Reid is really a talented author for writing great NA contemporary books with her unique writing skills.In this series, the previous books mostly focused on the attraction and romance between kaitlyn and Martin but this book is totally an emotional read.With how the previous book ended with a cliffhanger I was really excited to know what’s gonna happen next and now after I finished reading this, I can say that it was a perfect conclusion.

The book continues six months later after the  break up between Kaitlyn and Martin. Even after Six months, Kaitlyn still can’t get over him and tries really hard to forget him. For six months she grieved and suffered and didn’t want anything to do with him, even his name was forbidden to mention in front of her.Now after Six months, she finally decided to move on with her life. She  changed her major to music which was always her passion and now she joined a band and lives independently with nobody’s help.She got  an interesting band members in which two of them have developed an interest on her.Even though she was attracted towards one of the band member  Abram thoughts of  Martin always linger around her mind.

The Characters have matured well especially Martin who looked more sophisticated than before. Kaitlyn  tries  hard to being a women but she still got the same sense of humor and not to forget her nerd talk. The part of Sam are less in this plot when compared to the previous books but she was there when it was needed, and the whole book is more focused on the after effects of Martin and Kaitlyn’s  break up.

Kaitlyn thought she was close to being over him but suddenly her whole world comes crashing down when she finally have a re-union with Martin after Nine months.I know that what he did was wrong but still he sacrificed so much for her and I hated her so much for not seeing how much he loved her.After finally meeting together they come to a mutual understanding and agreed to remain as friends but they didn’t know that it was easier said than done. Living for a while  in the same house together, and pretend to be a perfect friend got the situation complicated and Kaitlyn  felt that hiding her true emotions is truly painful.

The story is slow paced and somewhat predictable but it was entertaining to read.I think it would be much better if it has a multiple POV. The chemistry is as always off the charts.Most of the book focused on kaitlyn’s inner turmoils and frustration  that may seem annoying to some readers nevertheless it was good plot.Finally the book ended with a  HEA ending and I think it was a great conclusion to the series and I’ll never forget it.
MY RATING: