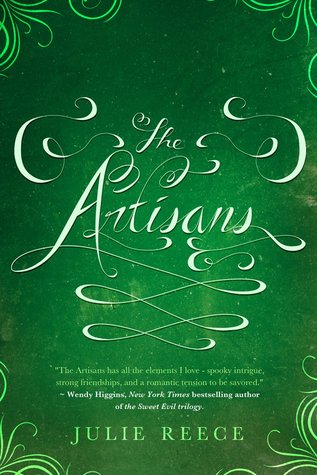 RELEASE DATE: May 12th 2015
AUTHOR: Julie Reece
GENRE:Young-Adult,Fantasy, Romance,Fairy-Tale Retelling.
PUBLISHER: Month9Books, LLC
SUMMARY: They say death can be beautiful. But after the death of her mother, seventeen-year-old Raven Weathersby gives up her dream of becoming a fashion designer, barely surviving life in the South Carolina lowlands.

To make ends meet, Raven works after school as a seamstress creating stunning works of fashion that often rival the great names of the day.

Instead of making things easier on the high school senior, her stepdad’s drinking leads to a run in with the highly reclusive heir to the Maddox family fortune, Gideon Maddox.

But Raven’s stepdad’s drying out and in no condition to attend the meeting with Maddox. So Raven volunteers to take his place and offers to repay the debt in order to keep the only father she’s ever known out of jail, or worse.

Gideon Maddox agrees, outlining an outrageous demand: Raven must live in his home for a year while she designs for Maddox Industries’ clothing line, signing over her creative rights.

Her handsome young captor is arrogant and infuriating to the nth degree, and Raven can’t imagine working for him, let alone sharing the same space for more than five minutes.

But nothing is ever as it seems. Is Gideon Maddox the monster the world believes him to be? And can he stand to let the young seamstress see him as he really is?

MY REVIEW: Here Comes another Fairy Tale Retelling of my favorite Beauty And The Beast.I don’t know why there were so many of FT Retelling’s are releasing these days.I really like modern day adaptation of the fairy tales so if there was any book out there I would definitely check it out.After reading “The Artisans” I felt that it was a nice read but not that much great but I really enjoyed reading this.I can’t say it was the best adaptation but some elements of it are present in it.

Raven Weathersby is a brave and curious girl who always dreams of becoming a fashion designer.Her step-dad Ben is the only one she got left as a family.Ben didn’t get over her mother’s death, so he becomes wasted drunkard and if that wasn’t enough he causes a huge loss to the town’s most notorious Maddox family.Raven finds a note inside the pockets of Ben asking him to meet Mr.Maddox alone to pay the debt.To save her only family member from being hurt, instead of Ben she goes alone to meet Gideon Maddox. Having no choice she accepts the deal made by Gideon in which she has to work for him for a year as a fashion designer for Maddox industries clothing-line and agrees to stay at his house.When Raven starts staying at Maddox house, weird and spooky things happens around her.After some time she discovers that there was some  hidden mystery around the Maddox house and also some hidden secrets of the Maddox family.

Gideon, the beast in this plot is somewhat  hot and cold type of guy.He is a very mysterious character but also arrogant in nature and I felt he was totally different from the Beast.At the start he always acts like  jerk towards Raven and also treated her like he owns her.Apart from being arrogant and jerk he was sometimes a total Flirt.Even though Raven hates him so much she can’t herself being attracted to him.

When Raven comes to know the reason behind his coldness she felt sad for him and starts to develop feelings for him.At start I so much hated  his attitude but after seeing how he truly cares for Raven and how he without any ill feelings admits Ben to rehab, he became a total swoon worthy guy.I would’ve loved it more if there was more interaction between Gideon and Raven because he seemed absent a lot.Maggie and Dane, best friends of Raven are the other two characters that I’ve really liked to know, because the friendship between these trio  seemed  realistic and I loved every moment of them in it.

The plot is intriguing and nice but I felt it lacked in  emotional factor, because Beauty and the Beast is very Magical, Emotional and Romantic and this didn’t moved me as it did, but still I liked reading it.Character building and Writing style is perfect I’ve got no complaints with it.It was so much different from the original tale, so don’t expect it to be the same.Honestly, I can finally  say it was a good modern day adaptation but  not the best, but still I definitely recommend it to all the fairy tale lovers.