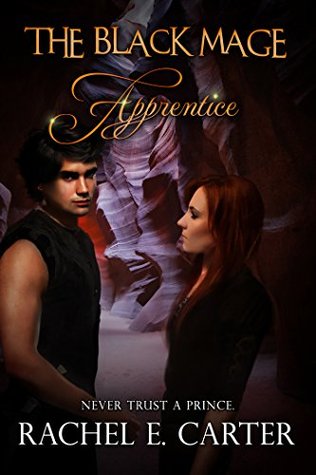 Now sixteen-year-old Ryiah is an apprentice of Combat, her school’s most notorious faction of magic. When she finishes she will be a mage, but in order to do so she has to survive four years with a training master she hates and her old nemesis, Priscilla. To make matters worse the unwanted attraction Ry feels for her sometimes-friend-sometimes-rival Prince Darren is at an all time high –even though he is betrothed to the very girl she can’t stand.

Really, the only bright spot to Ryiah’s new life is the time she spends with her friends, including an older apprentice named Ian, who she finds herself thinking about quite often.

Just when things start to get comfortable they take a turn for the worse. An apprentice is killed in a rebel attack and several mages end up dead. Unwittingly, the apprentices find themselves in the midst of a budding unrest between Jerar and its northern neighbor, Caltoth. For Ryiah the impending conflict means many things, but as her apprenticeship draws to a close she finds her biggest problem at home.

Unfortunately for her, Darren’s not going anywhere.

MY REVIEW: With the way the first book left off I have eagerly waited for this book to read and after finishing it I was overwhelmed with lots of emotions.This book is truly fantastic and more crazier than the first book.It was a whirlwind of emotions with fun,action and romance.
People who liked the first book “First Year” will surely devour this book.

I’ve undergone lots of emotions while reading this book. Ryiah is more kickass and bolder than the previous book.It brought more laughs from me when compared to the first book.The Author done  a pretty good job in making the readers engrossed in it and forget about the real world.She got a impressive writing style and creativity.

I’ve loved everything in this book especially the action and romance.The Stunt she pulled with Ian when she wanted to prove her brother and ella that she didn’t care about Darren is truly hillarious and crazy, yeah…. Take that Darren. At that time while reading that part inside me I’ve felt something like this

Everything smelled of pine and cloves and
him. There was a steady burn rising in me that I couldn’t
ignore. My whole body was in flames. I was losing myself in what it
felt like to be near him. This was what I had wanted. This was what
I was missing. This was what I needed.

The romance between Ryiah and Darren was scorching and steamy especially the kisses I mean lots of kisses. Sparks were flying everywhere.

Even though Darren acted like a Jerk for a lot of times I still rooted for him.The triangle thing made it more crazier and suspenseful. Riah  got mixed feelings for both Ian and Darren which was  a torture for both of them and also to us readers because she took a lot of time to make her decision. I’ve little bit  hated her  for making them under go such pain especially Ian.

The action is top notch and also entertaining with all the lightning and fire and not to forget the training sessions which were really good.The most hated character in this book is obviously Master Byron I’ve always hoped that someday she would lit his ass on fire with her lightning but she’s got more patience than I’ve thought.There were so many twists in this book that made it more mysterious.There was a mystery about the rivalry between the Caltothians and Jerar which I think would be revealed in the next book.

After Finishing this book I was already craving for the next installment and I hope Rachel would publish it sooner than intended.Hope the next book would be a total blast and more hillarious.I would definitely recommend this series to everyone who hadn’t read it yet.