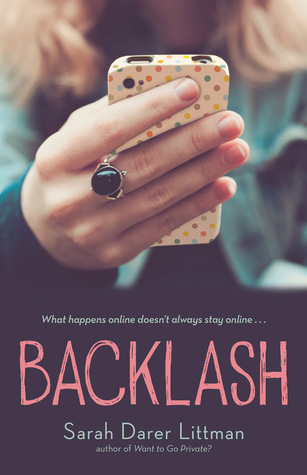 RELEASE DATE: March 31st 2015
AUTHOR: Sarah Darer Littman
GENRE: Young-Adult,Contemporary,
Realistic Fiction.
SUMMARY: He says: You’re an awful person.
He says: What makes you think I would ever ask you out?
He says: The world would be a better place without you in it.

She thought that Christian liked her, that he was finally going to ask her to his school’s homecoming dance. They’ve been talking online for weeks, so what’s with the sudden change? And where does he get off saying horrible things on her wall? Even worse – are they true?

It’s been a long time since Lara’s felt this bad, this depressed, this ugly. She’s worked really hard to become pretty and happy – and make new friends after what happened in middle school.

Bree used to be best friends with overweight, depressed Lara, but constantly listening to Lara’s issues got to be too much. Secretly, Bree’s glad Christian called Lara out. Lara’s not nearly as amazing as people think. But no one realized just how far Christian’s harsh comments would push Lara. Not even Bree.

As online life collides with real life, things spiral out of control, and not just for Lara. Because when the truth starts to come together, the backlash is even more devastating than anyone could have ever imagined.

MY REVIEW:    I just picked it up due to the cute cover and the intriguing synopsis, and I didn’t expected much from it either.Simply I just liked  this book but I didn’t loved it that much. It was really a thought provoking story and related to  cyber bullying happening now a days.

What I liked most about this book was the moral of the story and it also shows that, how by taking certain actions can effect each people in your life whether they are family,friends or the people you may know.It seemed very realistic and well detailed.The story is about Lara who attempts suicide after reading hateful comments from christian, who she met in facebook and chatted with him through online and she never even met him face to face.The twist with the Christian I didn’t saw it coming.

What i didn’t like in this book was the female protagonist who seemed too much dumb to me, I mean you don’t attempt suicide for a guy who you met through online only.The thing with Bree and her mother  didn’t seemed right to me.Sometimes I got too much annoyed with Sydney’s tantrums, she always behaved like she was 6 years old. Liam is the character I liked the most in this book because he seemed more mature than his mother and sister.

The main aspect of the story is cyber bullying and how it can affect the young minds which makes them fall into depression and social withdrawal which ultimately leads them to attempt suicide.Now a days it’s all about how many likes you got in facebook or any other social website and commenting mean things without any care  or thinking.

The whole book is narrated in multiple  POV which I basically don’t like much, but I think it was necessary for this book.Even though it was well written plot I felt something lacking with the character’s emotions.Even if there were some flaws i’d still say it was a good book and I do think it should be read by everyone.
MY RATING: