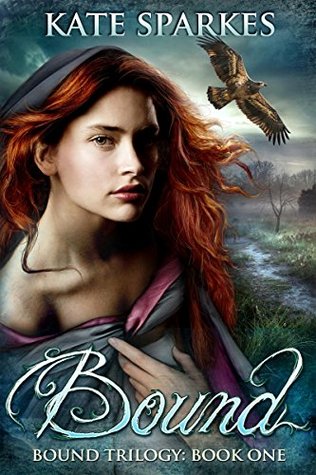 RELEASE DATE: June 26th 2014
AUTHOR: Kate Sparkes
GENRE: Young-Adult,Fantasy,
Romance,Fiction
SUMMARY:   Welcome to Darmid, where magic is a sin, fairy tales are contraband, and the people live in fear of the Sorcerers on the other side of the mountains.

Rowan Greenwood has everything she’s supposed to want from life—a good family, a bright future, and a proposal from a handsome and wealthy magic hunter. She knows she should be content with what she has. If only she could banish the idea that there’s more to life than marriage and children, or let go of the fascination with magic she’s been forced to suppress since childhood.

When Rowan unknowingly saves the life of one of her people’s most feared enemies, that simple act of compassion rips her from her sheltered life and throws her into a world of magic that’s more beautiful, more seductive, and more dangerous than she ever could have imagined.

Rowan might get everything she ever dreamed of—that is, if the one thing she’s always wanted doesn’t kill her first.

MY REVIEW:     It took me some time to finish this book because the story started with a good start and after some time it totally went downhill, the story is really slow paced and there was hell of a journey that took hell of a  time and it pretty much made me think when are they gonna reach the destination.The story is explained in a multiple pov’s which made the better understanding of the story in both worlds but it didn’t made me that much excited because of too much lack of action but it doesn’t lack in adventure  and it is the only thing that made me want to continue.

Rowan Greenwood is a young woman who belongs to Darmid always has a fascination towards magical creatures and liked reading fairy tales which is considered forbidden in their country.One day Rowan finds a wounded eagle and saves it from the Darmid hunters.While looking after the wounds of the mysterious bird Rowan accidentally heals the bird which is considered a powerful magic. Aren who belongs to Tyrea  is ordered by his brother severn (who is  also a king to Tyrea and evil villain in the story) to bring him a Sorcerer. Aren who is feared by most and also considered to be enemy to Darmid people comes to Darmid in search of a new sorcerer who are becoming extinct due to the killings by the Darmid Hunters who hunt anyone having magic in their veins.When Aren and Rowen paths cross, their life won’t be the same  where many questions arises, and they journey together for seeking the answers.During the journey Rowan feels that her dream had finally came true and enjoys the world of magic and slowly begins to get attracted towards her enemy.

It was really a high fantasy read with all the magic, dragons, fairies, mermaids,evil villain and not to forget a prince.I would’ve liked it more if there was more action between Severn and Aren or Rowan which would’ve made it more exciting but nevertheless it was a good fantasy read.It was really a compelling story with a fascinating world that would make you go crazy.I do recommend it even though i gave it a 3.5 stars because this plot only lacked in action but it got too much adventure that others may like it more than me.