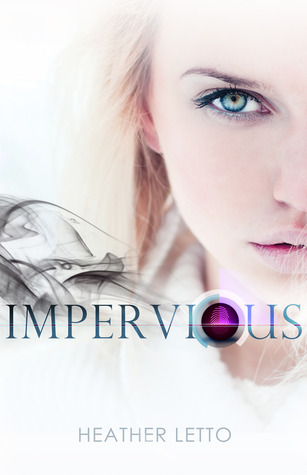 RELEASE DATE: March 9th 2015
AUTHOR: Heather Letto
GENRE:    Young-Adult, Sci-Fi,Dystopia,Fantasy
SUMMARY:The residents of Impervious are the remnant—the survivors of the War of Annihilation. And though the city is chockfull of pleasures to tantalize and entertain, a beast lurks in the corners, haunting the residents with its presence.

The Beast—a mysterious and terminal illness killed off most of Generations One, Two, and Three. And as Gen-Four prepares to take the stage, a provocative, yet questionable, new method to avoid an untimely death incites a cultural rage.

But Fran lives counter-culture, off the grid in true rebel fashion. With a life far from opulent, she scurries through dark tunnels, searching for hot meals with Pete while ditching the holographic security team. To her, it’s a healthy trade-off. Unaccountability means The Council can’t steal her sliver of hope―a belief that she’ll see The Epoch arrive before The Beast can pull her into its fetid embrace.

After losing her mother and then her Rebel mentor, Fran stumbles upon a miraculous discovery that may save the residents of Impervious. That is, if she can outrun The Beast…

MY REVIEW:    I  love Dystopian YA novels because sometimes i’d like to enjoy myself with the post-apocalyptic world where Survival matters the most.When my eye caught this title i thought that it would gonna make my day but it took me some time to understand the story.The writing skills was very  hard to understand with all the descriptive words maybe it will be easier for others.I didn’t know what’s happening in this world, after i read half of the book i do get it then.Author heather Letto wonderfully weaved a sci-fi digital world, where humans are divided into accountable and un-accountable.

Fran is from generation four and an unaccountable who is also called as a rebel, a rebel is those who doesn’t want to live their life in a impervious government way  in which their whole life and each action is monitored.The way the author build the Impervious world  is really amazing and fascinating that you do wish how it would  look like in visual. When Fran finds herself with a reader which is left for her by her mentor Chan, she unveils a secret that could make her free from this Impervious prison where everything is a facade.Fran looks for the exit portal with the help from her friend Pete who is also a Unaccountable rebel. I was pretty confused with the relationship between Fran and Pete because i thought they are friends but after Pete kisses Fran i thought may be it was unrequited love from Pete but later Fran also stars developing feelings for him so may be it will be revealed in the sequel. After escaping from the Impervious world Fran experiences a whole new world and she meets people who she never dreamt in her life that she would see again.Fran is a quick witted girl who has so much courage,intelligence and love for her family and friends.

This book got so much sci-fi in it that people who love sci-fi genre will surely devour this book.I’d like to give it a four star rating but it was hard for me to understand this and i wanted more story from this so i had to give it a 3 star, may be others who got no problem with it  can enjoy this book more, so it was  like” it’s not you it’s me” kinda thing.I think it was a really an amazing and awesome book so do read it and judge yourself.