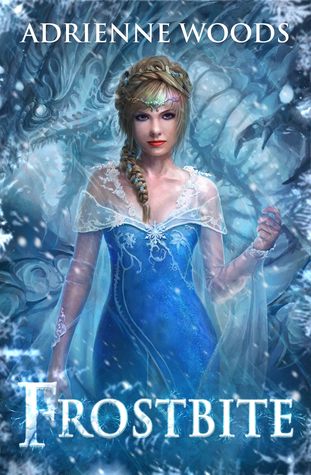 RELEASE DATE:  March 9th 2015
AUTHOR: Adrienne Woods
GENRE: Young-Adult, Fantasy,Romance
SUMMARY: Losing Lucian McKenzie, the Prince of her heart and discovering her true identity has made Elena Watkins’ life almost unbearable. However, new trials will test the 17 year-old’s strength and push her to limits she didn’t think were possible.

Only a mysterious offer from Blake Leaf, the Rubicon and a dragon predestined for evil, reveals there may be a light at the end of Elena’s dark tunnel.

With the life she thought she knew crashing down around her, Elena will have to face a monumental decision about the fate of Paegeia.She can either make peace with Blake’s demands or try once again to unravel the Queen’s secrets that lie deep within her dragon, Tanya La Frey’s, heart.

MY REVIEW:  I feel like the more i read it the more i can’t get enough of this series.Author Adrienne woods once again  done a tremendous job in making the series more mysterious and addictive. I’ve  eagerly waited for this book after completing  thunderlight which has ended with a huge cliffhanger.It was more intense and emotional read when compared to the other books in the series

After the tragic death of prince Lucian Mckenzie, Elena’s world is filled with sadness and anger.Most half of the book potrays how emotionally devastated she was after losing lucian and how she feels responsible for his death.With so much guilt she even lashes out her frustation and anger on her best friends sammy and becky. We get to see more Blake and Elena in this book where blake trains her on how to be a dragon. I’ve already predicted who will claim the rubicon but there are other twists and turns that i haven’t seen comin’.

We get to know  a new character  known as Cara  a thunderlight dragon who awakens from inside Elena.Cara and Elena overcomes each others sadness by forming a deep connection bond between them.Later it was revealed how Cara is awakened in Elena and how Queen Catherine’s dragon Tanya La Frey is connected to it which leads to Elena’s birth mystery.We get to see dark Elena after Blake reveals a secret that turns her world upside down. I was pretty confused with her feelingswhich made me irritated with her sometimes.

All the characters are well build and the plot is well developed.Even though the author isn’t a pro she has got a wonderful writing skills.It was a good read with high fantasy and it keeps getting better and better.Though it was sad that there would be no more Lucian but i can overcome it if there are more Elena and Blake in the next installment.

There is so much mystery,action and adventure in it that it has taken me a while to complete this book because it was quite lengthy.So many mysteries have been revealed in this book and more to be revealed in the next book.I would recommend this series  to everyone who likes YA fantasy with kickass female protagonist and dragons.