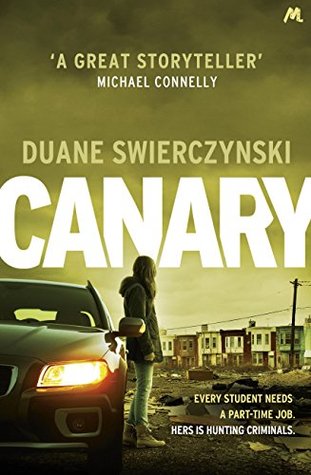 Sarie Holland is a good kid. An Honors student. She doesn’t even drink.
So when a narcotics cop busts her while she’s doing a favour for a friend, she has a lot to lose.
Desperate to avoid destroying her future, Sarie agrees to become a CI – a confidential informant. Armed only with a notebook, she turns out to be as good at catching criminals as she is at passing tests.

But it’s going to take more than one nineteen-year-old to clean up Philadelphia. Soon Sarie is caught in the middle of a power struggle between corrupt cops and warring gangs, with nothing on her side but stubbornness and smarts.

Which is bad news for both the police and the underworld. Because when it comes to payback, CI #137 turns out to be a very fast learner..

REVIEW:  Generally i’m pretty choosy with the thrillers and mysteries but when i read the synopsis of this book i thought “this sounds pretty interesting” and i got myself ready for this and hoped it’s  gonna thrill me a lot.Well it did thrill me but not blow your mind much.I am pretty much  new to this author’s work so there were no expectations but it wasn’t dissapointing.

It started quite good and slow paced and  then there was a problem with some mulitiple Pov’s that got me litle annoyed and i would’ve liked it more  if it was narrated  with less pov’s. The whole book was like watching a crime thriller movie.When i  reached half of the book i almost thought to let it go but i didn’t and thank god the real action started after Sarie meets chukkie.I liked how the author described sarie’s feelings as a journal entries to her mom.The funny thing is i got to know there was so much about the pills and their types.The author did a good job in narrating the underworld which contained lots of crime,body dumpings,drugs,killings,guns etc.

The Story was about a 19  year old college freshman and honor’s student Sarie Canary Holland and how she gets herself into a complicated  situation when she does a favour by giving a ride to her fellow honor’s student named Andrew Pike although most of the book sarrie referred  him as D. Sarie wasn’t aware of  D’s drug dealings with chukkie and unfortunately she ends up busted by a Naracotics Cop Benjamin Wildey. Wildey works in a NFU-CS squad who is looking for a while to catch Chukkie morphine and sarie is the only  lead he got to catch him.

Sarie didn’t want to ruin the life of D by giving up his name, so instead she becomes the CI#137 a confidential informant.Sarie and Wildey make a good team there were some funny banters and frustrated conversations between them but they worked out well. I don’t know why sarie would risk her life for a guy she barely knows even though she has a crush on him it was kinda stupid.The Story gave me a realistic feel about  how crime world works with drug dealings, corrupt cops and drug lords.

The whole book is about catching  drug dealers and a drug lord chukkie. While on the journey sarie makes a friendly relationship with a hitman ringo who got loads of humor with him and helps her a few times.When things didn’t go the way they are meant to she takes the matter on her own hands.You’ll need a lot of patience to read this book because it got a really long chapters and the real action starts at the last phase of the book and i really enjoyed it.I would recommend it to anyone who are into crime and thrillers.